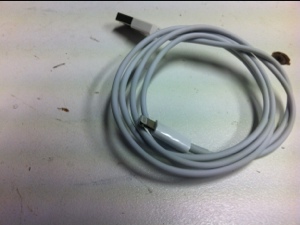 With IC chip they claim. Roughly $8 from eBay. So much for Apple’s plan to clamp down on aftermarket accessories. That being said, there’s no guarantee these (I assume) cloned chips won’t be blocked by some future firmware update, at least you’ll still be able to charge with these cables (theoretically) even if you can’t sync with them. I’m very curious to know what Apple actually charges for a license to make these cables (and docks) to reputable companies like Belkin and so on. Presumably the pricing is more or less fixed so that aftermarket cables should cost similar to Apple’s genuine ones.

Maybe the real killer app will be USB3.0 when Apple adds that to the Lightning spec for the iPhone 5S. I imagine the Chinese will have difficulty mass producing those in the immediate future – judging by the distinct lack of ordinary USB3.0 cables at rock-bottom bulk lot prices. 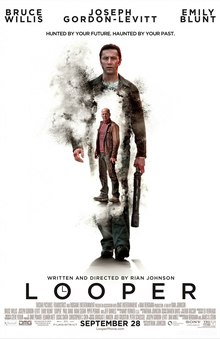 If you have any sort of understanding of how time travel (theoretically) actually works – avoid this film. Not because it’s mind bendingly complicated, but because it’s mind bendingly stupid. The characters are dry and unlikable, the plot is riddled with holes. Joseph Gordon Levitt looks like a train ran over his face. Predictable ending – which is a shame as the writers could have gone just about anywhere with this one. So many missed opportunities to make a clever, well thought out film that you makes think.

Incidentally, if you want something mind bending with a splash of horrific frightening, try The Triangle.

“Dutch hosting provider Antagonist announced their in-house developed technology that automatically detects and fixes vulnerabilities in their customers’ websites. The service is aimed at popular software such as WordPress, Drupal and Joomla. ‘As soon as a vulnerability is detected, we inform the customer. We also explain how the customer can resolve the issue. In case the customer does not respond to our first notice within the next two weeks, we automatically patch the vulnerability.’ Antagonist plans to license the technology to other hosting providers as well.”

Like clockwork my iPhone 4 has transformed from a snappy useable mini computer to a bog standard mobile phone. I haven’t even updated to iOS 6 yet and I’m already having RAM issues with everyday apps. I realize the processor clock speed is the same as the day I bought it, but with the slow march of progress comes increased hardware requirements.

It’s really quite clever, Apple did the same thing to the 3G with the release of iOS 4. Made it basically unusable as a smart phone – sure it could still make calls and send text messages, but try and open more than two tabs in the browser and you’re gonna have a problem.

It seems I can no longer switch between apps without iOS innocuously dumping me at the home screen, that brief flash is the operating system clamoring for memory and obliterating background applications. That song you were up to in your Music playlist? Whoops, I forget. That post you were composing in a forum reader app, that’s gone. Oh now you want Safari, allow me to freshly reload those two tabs you had open – oops, one of them is image heavy and uses Javascript, queue dump to home screen in 3, 2, 1.

It’s not enough to make the user envy for the latest shiny touchscreen wonder, Apple makes it a necessity by nerfing your current equipment. I almost wish they’d take out a page of Epson’s book and simply allow the product to cease functioning and demand I buy a replacement product to keep this insane consumption based economy running. At least that would be honest, sort of.

Actually a lot of fun. Haven’t finished the game yet. It’s your typical Call of Duty, ticks all the boxes. Quick time button mashing events in semi-cutscenes, overly punishing poorly explained sequences in which you will die – over and over again. Otherwise you’re pretty much invincible, just hide when you get hurt. No cover system is starting to make the game feel dated, the graphics also leave a lot to be desired in parts. If you’re a fan of the series, this has everything you want from a CoD game. If you’re not – this is just more of the same and is unlikely to impress. This is the first game in months that has held my attention for more than a few minutes, sometimes it’s nice to just shoot shit without thinking too much.